Who we are. We are your hosts, and we are Gillian Rice-Duncan and Neil Duncan.

Scroll down for a slide show of loads of photos from our renovations!

Gillian Rice-Duncan is a licensed massage therapist in the state of Louisiana, USA, a certified Aromatherapy practitioner (IIHHT 1998 & ITEC 1999), and a Hatha Yoga teacher (350hr 2010). She is a wife, mother of two daughters and a grandmother. “Just call me yogananna!” She has been vegetarian since 1995 and is now vegan. 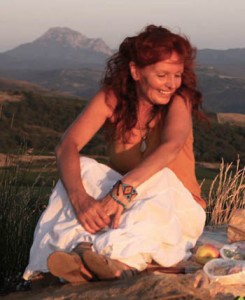 Born in London, and raised just outside in Hertfordshire, I took my first yoga classes in 1969 at the local community college.  It was a one year course of two hours a week which began a life long interest in yoga and yoga philosophy.  After meeting Neil, I moved to New Orleans, Louisiana, where we married in 2002.  I had practiced yoga on and off, but after Hurricane Katrina (August 2005), I began to look for something more substantial in my life, and when the student is ready, the teacher will appear.  I found Michelle Baker of Swan River Yoga.  Michelle is a Jivamukti, Sivananda and Anusara Yoga teacher, and her energy, devotion, and expertise made me want to continue learning from her.  In 2010 I took Michelles 350 hr teacher training course, and taught yoga at the Swan River Mandir in New Orleans.  A year later Neil and I moved to France to commence the renovation project, and create Santosha Yoga Retreat and Healing Centre.  The renovations are now complete, and both Neil and I believe we have done the best job that we could have done.  Michelle has shown her support by bringing groups of students to Santosha for four years. 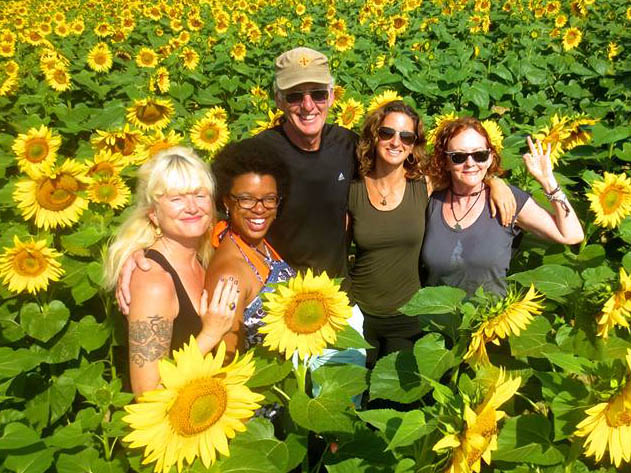 Neil with the Michelle Baker (left) and the Swan River yoga group.

Neil Duncan was born in England and grew up in Scotland. He  graduated from Glasgow University with a degree in Aeronautical Engineering, and in 1980 he moved to New Orleans to work for NASA on part of the Space Shuttle Program. He is a citizen of both countries. He has four children in the USA, and he is also a grandfather.  When the Space Shuttle Program ended in 2011, Neil took early retirement and we moved to France.  The renovation project proved to be far bigger and more costly than either Neil or Gillian first thought, but it had to be finished. Neil learned much from watching contractors working on the house, and he managed to do a lot of the building work himself.  Neil has been a vegetarian for since 1983, and he has a long standing connection with the Hare Krishna community at New Talavan, Carriere, Mississippi.

Together, Gillian and Neil run Santosha Yoga Retreat and Healing Centre.  “We are totally dedicated to providing an experience that will create life long memories for our guests.”

A brief history and slide show:

When we purchased this 450 year old house in May 2009, it was virtually a ruin, but with a new roof.  We had to take out all the floors and internal partition walls. This allowed us the freedom to design a space that is perfect for yoga retreats and the practice of other healing arts.  We began our renovations in 2011.  No one had lived there since WWII when it was used as a secret base for the French Resistance. There was no electricity, water or bathrooms. But the roof was new. We could see daylight through some of the walls, even though they are up to 75cm thick. 90% of the wood was rotten. Our friends thought we were mad. So did our neighbours, and the guy who sold us the house. But the house has a great view towards the Pyrenees, a barn where we could put a yoga studio, a pretty walled garden and plenty of room for guests. We have tried to keep as much of the character of the house as we could, incorporating such things as the old bread oven into one of the guest bedrooms. So you will find comfortable, affordable accommodation, with a blend of old and new. Exposed stone walls over 400 years old with LED lights and wifi.

Here is an 11 minute slide show detailing the progress of our renovations.  I hope you enjoy.